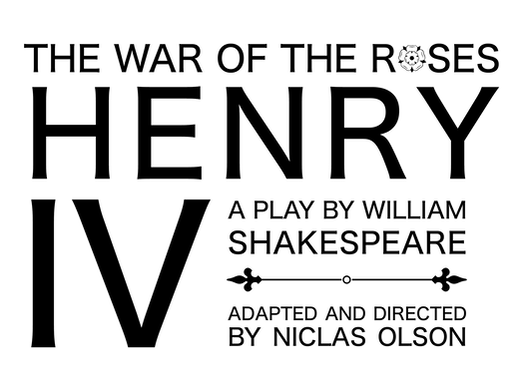 A decade after Henry IV deposed Richard II to become King of England, the cracks are beginning to show. His closest advisors, led by the ambitious young Hotspur, foment rebellion while the crown prince wallows in debauchery with a gang of thieves. War is on the horizon, alliances are crumbling, and legacy is never guaranteed.
The entirety of William Shakespeare's WAR OF THE ROSES saga is brought to life in an ambitious new season from New Muses. Over the course of the 2021-22 Season, New Muses will present the entirety of Shakespeare's interconnected history plays beginning with a one-night-only staged reading of RICHARD II. The fall and winter bring an action packed journey through the tales of HENRY IV and HENRY V. Then spend the summer uncovering the political machinations behind HENRY VI and RICHARD III. Ambition, betrayal, God and country... war is coming.

The two parts of William Shakespeare's HENRY IV have been adapted into a single play for this production.
Admission is limited to vaccinated audience members only and face masks are required. Proof of vaccination will be required for all party members. The production will be filmed and released for on-demand viewing by non-vaccinated audience members after the conclusion of the live run. Please contact the box office with any questions or concerns.

adapted from the Historie of King Henry IV, Parts 1 & 2 by William Shakespeare

Additional roles will be played by members of the company

ADAPTED and DIRECTED
by Niclas Olson